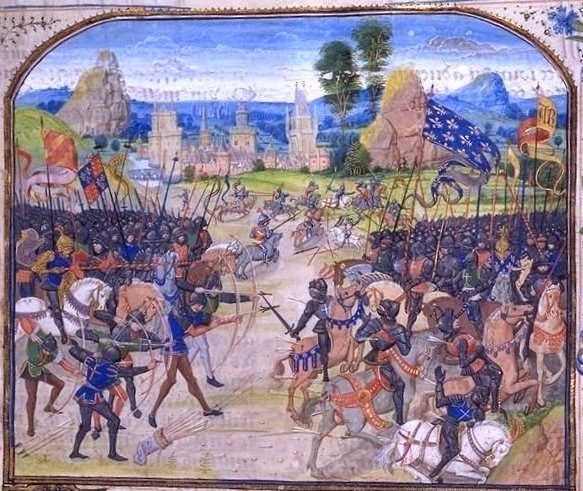 This month's Blog Carnival Topic is "Art or Craft, to which we reply...

There once was a kingdom that had two villages. All the subjects of the realm lived in one village or the other.  Much ado was made by the inhabitants of each village that they alone were the favorites of the Gods, and thus obviously superior to the inhabitants of the other village. These frequent declarations led to constant warfare and skirmishes between the two villages.

Despite generations of warfare, neither side was ever able to win a decisive victory in their claim to superiority over the other. This did nothing to dampen the fervor and tenacity to which each side proclaimed its virtue over the other.

So caught up in the fighting were the people of the two villages that they didn’t notice that no one was minding the crops, and the people of both villages were starving.  Or that the people of the other kingdoms no longer came to trade at their village markets and fairs.  To make matters worse, the generations of warfare had left some villagers so confused that they no longer could tell which village they belonged to.
It was if they were all the same.

Of course, this could never be. For the wise men of each village had prophesied, in tongues no less, the certainty of their differences. More sacrifices were needed, said the wise men, so that we may prove once and for all throughout the realm, which village is indeed the best.

And so the villagers continued to fight and starve and sacrifice their children in a battle that no one outside the villages cared about and those in each village no longer understood.
Posted by 2Roses at 10:55 PM 1 comment: Links to this post

How does your ethnicity impact your art

This months Blog Carnival asks “What’s your ethnicity” and how has it impacted your artwork. Easy, we thought! Then again, what exactly does “ethnicity” mean? We looked it up. Turns out it covers a lot of ground.

Ethnicity or ethnic group is defined as social group of people who identify with each other based on common ancestral, social, cultural, or national experience.

Membership of an ethnic group tends to be associated with shared cultural heritage, ancestry, history, homeland, language (dialect), or ideology, and with symbolic systems such as religion, mythology and ritual, cuisine, dressing style, physical appearance, etc.

Larger ethnic groups will tend to form smaller sub-ethnic groups (historically also known as tribes), which over time may become separate ethnic groups themselves through the process of ethnogenesis.

Not so easy after all. Particularly if we are trying to draw meaning or particular influence on a lifetime of art work.

The Ancestors
John come from a very long line of seafarers. Norwegian Vikings as the parents pointedly reminded us as children. This was the way of the father and grandfather and great grandfather, etc., and was certainly the path proscribed for John from an early age.

Travel, looting and pillaging certainly had its appeal for a while, but participation in other groups of artists and intellectuals offered perspectives on life paths that were considerably different – and safer.

Corliss’ parents also had plans for her life. She was being groomed to take over the family floral business. Under the tutelage of her father, Corliss developed a strong creative voice as a designer.

This had pretty much the same effect on the family plans as any standard Viking invasion. The odd twist of fate being that Corliss’ family tree stems from Germany, Ireland and France. An ancestral appreciation for drinking and brawling set the basis for an instant love match with John.
Oh yeah, and there was this art thing we shared too.

Cultural Experience
Hippies. Joining this tribe was a game-changer for both of us. By now all the parents were getting the idea that John & Corliss were straying from the chosen paths. This was a period of intense political activity made more intense by a massive quantities of sex drugs and rock&roll. As it turns out sex, drugs and rock&roll are just fine with everyone. Put politics into the mix and things can get violent quickly. Extensive travel during this period offered perspectives on other life paths that were considerably different – and safer.

National Experience
Duty called. Military service sort of summed up John’s life experience to date. It had it all. Travel, politics, looting, sex, drugs, rock&roll, and violence on government sanctioned scale that cannot be imagined until it is experienced. Being part of an invading army is a transcendent experience. Whatever ideas John had that there were any rules for anything, pretty much evaporated during this period. Moral ambivalence turned out to be just what the military was looking for however, and special assignments followed. Corliss became part of the military lifestyle in wartime – which is to say bat shit crazy became the new normal. By this time it was abundantly clear that just about any other path would be considerably safer than the one we were on.

Religion, Mythology and Ritual
Catholicism and the Mob. Both John and Corliss were raised Catholic- old school Catholic. In John’s case the parents were mobbed up AND staunch Catholic. Two groups that share a lot of similarities in an many odd ways. The kinder softer church was still half a century away, and corporal punishment was accepted, encouraged. The mob never did make the transition.

Both the mob and the church were a big part of growing up and each organization had a very dense mythology and ritual. Sometimes they overlapped. This all seemed like the natural order of things growing up, even if it led to some truly bizarre nuggets of parental advice and guidance. Strange and beautiful advice it turned out, that provided a perspective on how to survive in an unsafe world. God works in mysterious ways.

Tribe
Art - Our tribe through all of the above. Art embraces everything, expresses everything. Art has been a shield and a weapon, sometimes both at the same time. Art is our way of seeing, our way of doing and our way of being. Everything we have ever been and want to be comes out in the art. It has always been safest path – even when it’s not.
Posted by 2Roses at 9:40 PM 1 comment: Links to this post