How Has Your Work Evolved

We have been asked, "how has your work evolved", many times throughout our careers. Despite our previous tome on politically correct artistic influence, the real answer is that all artists are guided on a daily basis by a wide variety of internal and external influences. This rarely results in a straight linear path in the evolution of the creative output.

This question of "evolution" is often confused with the artist's refinement of a particular technique.
The resulting answer usually amounts to, "I started painting squares and circles and I wasn't too good at it. Now I paint squares and circles with great precision."

In our case the "technique" is experimentation, collaboration and hybridization.
Here's the executive summary for those of you who are in a hurry: A long time ago we started experimenting and collaborating and creating work with a hybrid of materials and techniques. We weren't to good at it. Now we're much better at it.

We’ve been making jewelry as part of the output of our design studio since 1972. It was a very small part in those days. In 1989, we decided to focus the studio much more on jewelry. This shift was a reaction to the then growing art jewelry movement. All of a sudden jewelry design became the creative Wild West. Traditional concepts of jewelry and adornment were being challenged. Bold experimentation with materials and techniques was expected. This environment suited us just fine.

We came to this new movement well armed with over a decade of formal art training and a broad experience with a wide range of materials from the studio’s industrial design practice.  The studio was also heavily involved with the mining, gem and mineral trade at the time. A significant part of our output was lapidary work with an emphasis on commesso (intarsia) techniques. 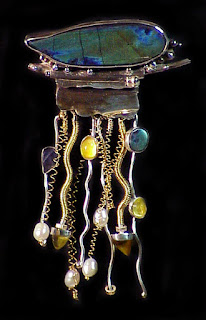 This jelly fish design was typical of the type of work the studio was producing in the late 1980s. We often worked with plant and sea life forms using a fair amount of custom cut gem material. 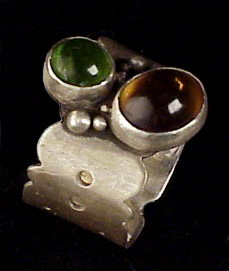 In tandem with the more experimental work, the studio still produced a regular stream of more conventional products such as this ring with custom cut tourmalines. This was mainly an acknowledgment that we wanted to keep eating.  During this period, we were also mining almost all of the gem and mineral material used in our work 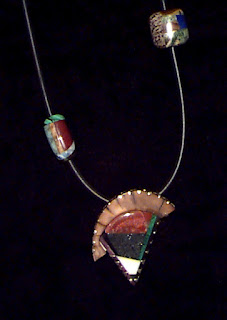 By the early 1990s, we had developed a purist aesthetic that relied almost exclusively on stone with little to no metal. This approach won considerable critical acclaim but proved to be too advanced for the public taste. Many people simply did not understand why there was no silver or gold in the pieces. 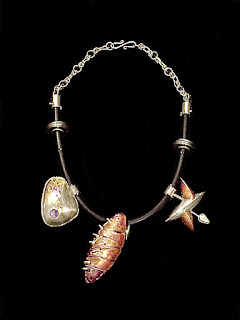 This reaction led us reluctantly back to using more metals. To satisfy ourselves we decided to play more with unconventional compositions and materials. During this period, we made considerable strides in mixing metals, plastic, wood, stone and resin into the designs. 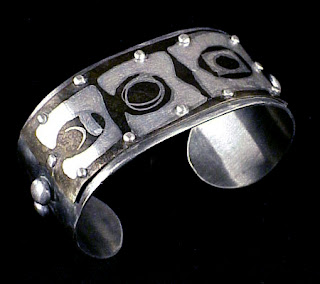 The experimentation we were doing with materials also exposed us to a growing list of metal specific techniques. By the mid-1990s, we had expanded our metal repertoire far beyond using a single metal. During this period, we produced a considerable body of work using everything from marriage metal, keum bo, mokume game and Damascus. 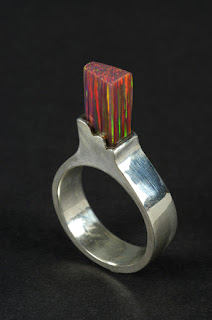 By 1998, our reputation for working with a wide variety of odd materials was well known. Because of this, we were approached by the Mitsubishi Corporation to develop jewelry applications for a new laboratory-grown opal product that they were introducing to the US market. This ring is one of the promotional prototypes produced for that program. 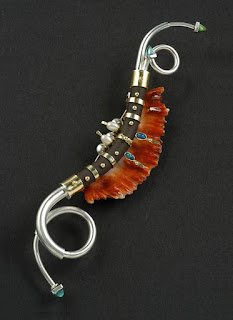 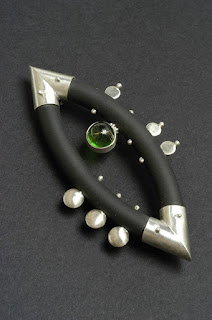 During the early 2000’s the studio output was both flamboyant and restrained. These dual paths served both our creative needs and the demands of the marketplace.

By mid-decade, we had arrived at a middle ground and were producing lines that featured a highly eclectic blend of materials in a somewhat standardized context such as this bracelet. The form of the bracelet allowed us to mix a highly varied range of materials into each segment. 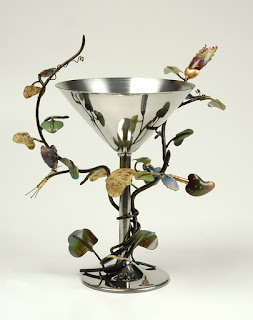 Throughout this period of focusing on jewelry, we continued to produce small sculptures and functional objects. These objects, such as this martini glass, exhibited a considerable overlap of the jewelry and metal working techniques we had been developing. 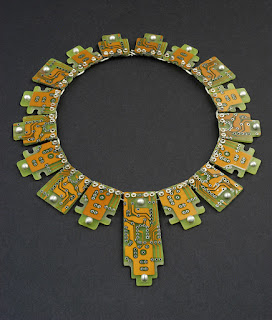 At this time, we were also very interested in using completely non-jewelry related industrial materials in our work. Electronic and computer components featured prominently in our work from this period. 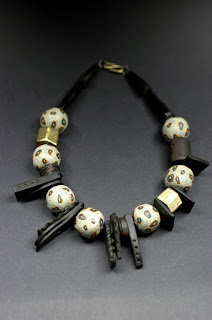 It was during this period of working with industrial materials that we discovered polymer clay. This material proved to a transformative intersection in our work. Early polymer work used the material as a counterpoint in traditional compositions. 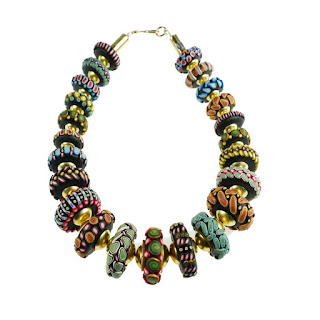 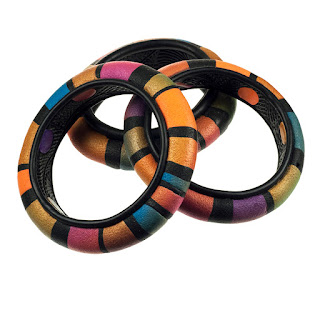 As we progressed, the work became bolder, and the polymer began to stand on its own as the main element of the work. 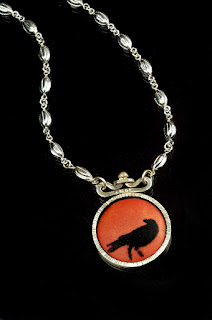 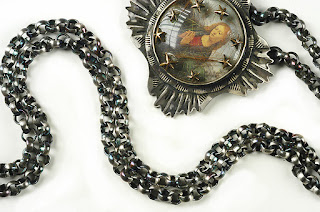 In parallel to polymer clay, we are also currently re-examining ancient metal working techniques, specifically from Asia and the Middle East.  These ancient techniques are being melded with modern technologies and materials such as micro pulse arc welding and polymer clay to create a hybrid style.

Blog Carnival is a monthly exercise by the members of the Association of International Metalsmiths.
Volunteer members post their own perspectives on a common theme, giving the reader a view into the minds and lives of how artists from around the world relate to the same topic.